…and a huge thank you to the readers who have bought and enjoyed my books and to the wider writing and blogging community who are ever willing to support and to cheer and to commiserate.

Today is the official publication day for Saved by Scandal’s Heir, and it feels like it’s been a long time coming! My deadline for the book was July 1st 2015, and I met it by the skin of my teeth. By the time I sent the ms off to my editor, I was so close to it I had no idea if it was good, bad or indifferent. But she loved it and after a few ‘tweaks’ (that’s ‘editor-speak’: they are never quite as benign as they sound!) it was done and dusted. 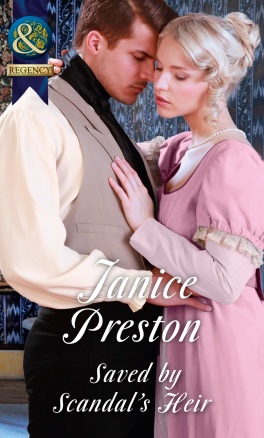 This is a book close to my heart. It tells Harriet’s story (she was Richard’s former mistress in From Wallflower to Countess), and I knew she’d had a tragic past – one she kept bottled up – but until I started writing her story I had no idea how much heartache she had suffered. And, of course, I had the pleasure of writing more about Richard and Felicity from From Wallflower to Countess and also about Matthew and Eleanor from Return of Scandal’s Son.

If you want to know more, you’ll just have to read the book ;-), but Harriet does get her happy ever after, of course, courtesy of hero Benedict. And I’m not going to apologise for writing books with happy endings. It seems some people are of the opinion that happy endings are, somehow, less worthy than unhappy endings or those that are left open for the reader to decide. I disagree. Would you be satisfied with a crime novel where the crime was left unsolved? Or a thriller where the bad guys won (unless there was a sequel planned, of course)?

I was also thrilled to read my first-ever review on a blog – the SweetisAlwaysinStyle blog run by the lovely Blossom Twins. Here is a link to their review. Thank you Kelly, who read the book and wrote the review.

As always, you can read the first chapter of Saved By Scandal’s Heir by selecting the Books tag at the top of this page, and following the menu.

Or you can buy your copy here!

My new book, Return of Scandal’s Son, is out now.

It is the first of two linked books published under the title Men About Town, Traders in Temptation. The second book, Saved by Scandal’s Heir, will be out in the first half of 2016.

The heroine of Return of Scandal’s Son, Eleanor, Baroness Ashby, is that rarity: a peeress in her own right.

The earliest English baronies were created by a writ of summons to Parliament (rather than by letters patent as later became the norm). The remainders of these baronies by writ devolve upon the ‘heirs-general’ rather than being limited to male heirs, meaning an only daughter can inherit the barony (but not if there is any male progeny, even if he is younger than her). It’s interesting that, if there are two or more daughters the eldest does not inherit, but the title will fall into abeyance until the co-heirs can come to an honourable agreement as to which of them will claim the title. The claimant must then petition The Crown to have the abeyance terminated.

I really enjoyed writing about Eleanor – she is loyal, courageous and independent but her outer confidence masks a deep insecurity at her core. She is also impulsive at times, and I knew she needed a resilient hero. Enter Matthew:  strong and honourable, but with a secret in his past that could easily damage Eleanor’s determination to be fully accepted by Society and to gain admittance to Almack’s Assembly Rooms.

I thought it would be fun to see how a proud man like Matthew would cope with falling for a wealthier, higher-ranking woman than him.

If you have read Mary and the Marquis you might like to know that Eleanor is the cousin of Lucas, Marquis of Rothley. Lucas’s mother, Lucy, is Eleanor’s chaperone, and his younger brother, Lord Hugo Alastair, also makes an appearance.

You can read the first chapter of Return of Scandal’s Son by following the Books tab at the top of this page. 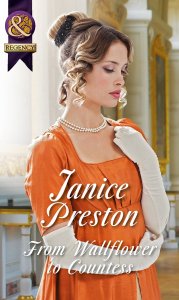 My second Regency romance for Harlequin Mills & Boon, From Wallflower to Countess, is out now as both a paperback and an ebook.

I first met the hero, Richard, the Earl of Stanton, many years ago when he was a drop dead gorgeous secondary character in my first ever attempt at writing a Regency romance. That attempt has not yet seen the light of day, but I always knew Richard would have his own story one day. I had no idea which lucky lady would share his journey until, one day, he ran up the stairs in his shirtsleeves and came face-to-face with an unprepossessing but sparky spinster who had absolutely no intention of ever getting married.

One year on from that meeting, Lady Felicity Weston’s fear of unrequited love is as strong as ever, but her circumstances have changed. She begs her mother to find her a quiet, unremarkable gentleman with whom she might be content, little realising she will end up with Society’s most eligible bachelor.

Here is an excerpt:

‘This is ridiculous. You are right. If we are to wed, we need to understand one another. And, I admit I have doubts. Not about you. Well, that is…’ She paused, her brows drawn together in a frown. ‘No, that is untrue. It is about you, but it is about me, also. You and me. Together. You see, I hadn’t thought…I never presumed to be presented with such a…such a…catch, if you do not object to my calling you that?’

Richard bit back a smile. He had been called a catch many times, he was aware, but never to his face before. And never by an earnest-faced female who appeared to believe herself unworthy of a ‘catch’ such as he.

‘You may call me what you will,’ he said, ‘as long as you promise not to use such insultingly offensive terms that I shall be forced to take umbrage.’

She laughed, revealing a glimpse of white teeth. ‘Umbrage? I always thought that to be a state applied to elderly dowagers. Do you sporting gentlemen consider it a fittingly masculine trait, my lord?’

This was better. The spirited girl he remembered from last year had surfaced, her face alive with laughter, her eyes bright.

‘Perhaps umbrage does not quite convey the precise meaning I hoped to convey,’ he conceded. ‘Which word, in your opinion, should I have used, if I am to portray a suitably manly image to my future wife?’

Disquiet skimmed her expression, then vanished. Had he imagined it? Was it the bald reminder that she would be his wife that had disturbed her? Her countenance was now neutral, but her eyes remained watchful and she made no attempt to answer him.

‘Would you have preferred me to use “offence” perhaps, or “exception”?’ He leaned closer to her, and said, ‘I do not, you notice, suggest “outrage” for that, I fear, would not meet with your approval any more than “umbrage”. It is too synonymous with spinsters, would you not—?’

Felicity stiffened. ‘Do not make fun of me, sir. I may be a spinster and, therefore, in your eyes, a poor, undesired thing, but I have feelings and I have pride.’

‘Felicity, I promise I intended no slight. The thought never crossed my mind that you might think I was making fun of you. I was…I was… Oh, confound it! Come here.’

He had run out of words. He clasped her shoulders and drew her close. A finger beneath her chin tilted her face to his. He searched her eyes. They were shuttered. She was rigid in his arms. Was she scared? Had she never known a man’s kiss? The thought, strangely, pleased him: knowing his wife had never experienced another man’s touch. But he must take care not to frighten her. He lowered his head, slowly, and put his lips to hers.

He almost recoiled in shock. He had expected ice. What he felt was fire.